Titan invests in both the S&P 500 and a range of other markets from cryptocurrencies to real estate. In this article, we highlight an investing strategy that has outperformed the market for over five years.

Titan Invest is a company that offers a service to be able to outperform the S&P 500. The company has been around since 2008, and they have had some ups and downs, but overall their performance has been pretty good. 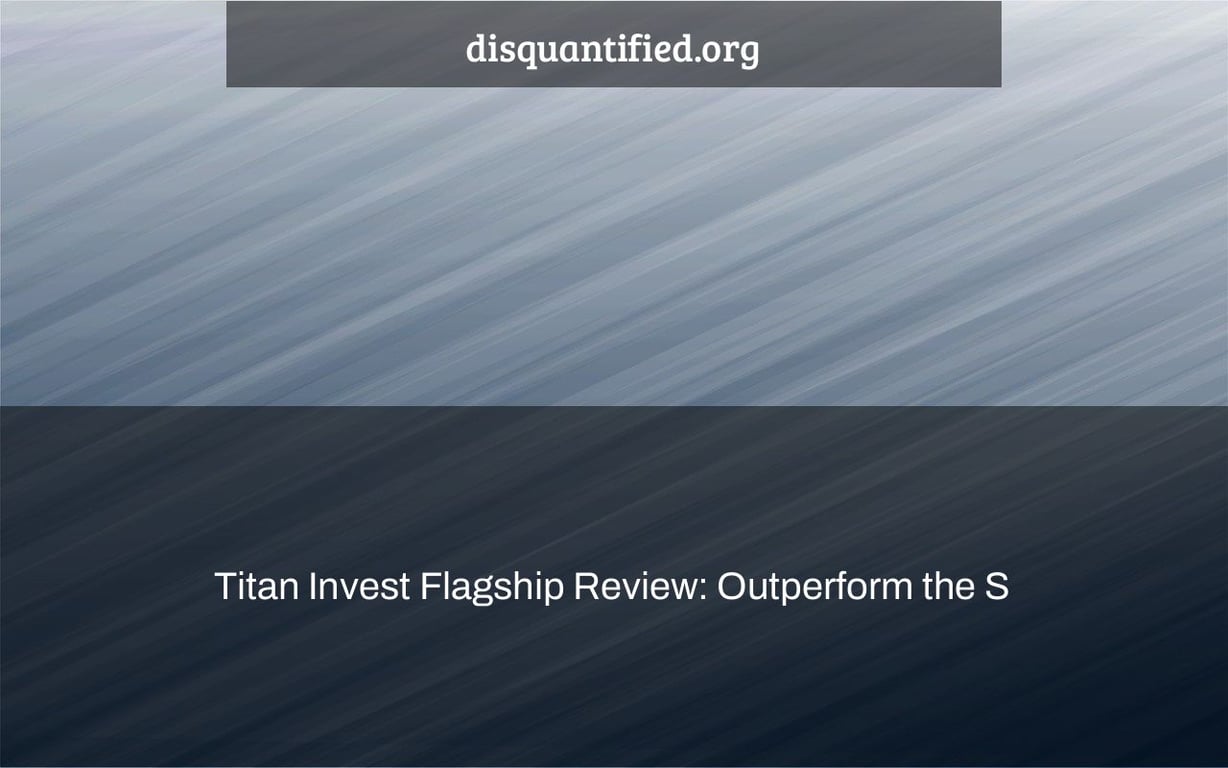 Titan Asset Management is a hybrid of a robo-advisor and an actively-managed investment fund, with clients owning a portfolio that is managed to exceed a certain benchmark.

Its Titan Flagship approach was introduced in 2018, and it has since generated good returns by condensing the master portfolio into a small number of firms that the team deems to be the most promising based on their present condition and future.

For investors who are contemplating creating an account with Titan, we go more into the peculiarities of this Flagship strategy in this post.

What is Titan Invest, and how does it work?

Titan Invest is a robo-advisor that provides customers with four investing strategies that aim to outperform the market.

The Titan Flagship strategy focuses on large-cap firms situated in the United States with strong management and long-term competitive advantages. For this category, this approach competes with conventional large-cap indexes such as the S&amp;P 500 and other comparable broad-market benchmarks.

The Titan Opportunities strategy invests on small and mid-cap firms in the United States with strong growth prospects. Over a three to five-year period, it aims to beat the well-known Russell 2000 index.

The Titan Offshore strategy focuses on market-leading firms headquartered outside of the United States, exposing investors to developing and established nations’ beta-rich returns.

Finally, the Titan Crypto approach focuses on the native tokens of a few blockchains in order to capitalize on the technology’s ascent and promise as the next frontier for digital solutions.

Titan’s leadership team comprises seasoned industry veterans such as Clayton Gardner, the company’s founder and Co-Chief Executive. Gardner has a solid history in buy-side investment businesses, including a successful career as an investor at a multi-billion hedge fund. To understand more, read our Titan Invest review in its entirety. 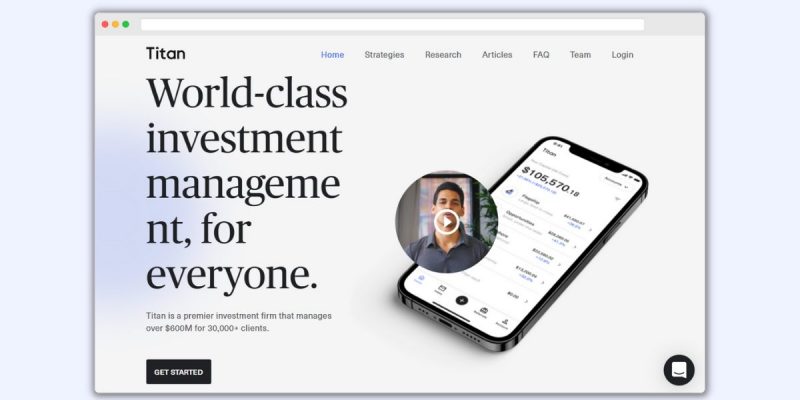 What is Titan Invest Flagship, and how does it work?

Titan Flagship invests in large-cap US firms with a market value of more than $10 billion. Here are further specifics on the criteria used to create its portfolio, as well as what investors may anticipate from it.

The Flagship portfolio is often made up of no more than 25 individual stocks from large-cap firms with solid fundamentals, growth prospects, and long-term competitive advantages, making it a concentrated portfolio.

The assets in this portfolio are chosen after the team conducts extensive quantitative and qualitative research on each possible candidate. Reading and evaluating financial records, research studies on the marketplaces in which the firm operates, and other comparable documents are all part of the process.

Based on an estimate of the company’s intrinsic worth against the market price of its shares, the team ideally attempts to invest in firms that can generate an annual return of 15% or higher over a period of at least three years.

The portfolio is normally equally-weighted, which means that every issue in the portfolio receives the same amount of the fund’s assets. Turnover should be limited, and rebalancing should be done on a regular basis if one position deviates considerably from its intended weight.

Portfolio managers may add and remove specific companies at their discretion under the Flagship strategy, which takes an active approach. As a result, benchmark comparisons only show the strategy’s ability to generate alpha-rich returns when compared to a beta-neutral approach. 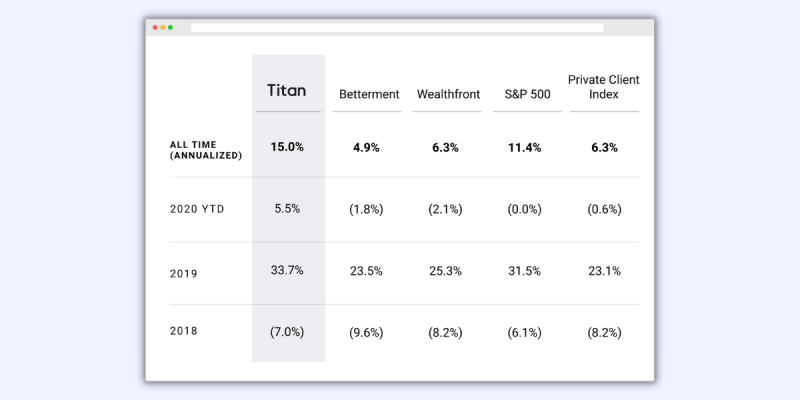 Titan Flagship is a large-cap-focused strategy that strives to outperform the S&P 500 index, which is made up of the 500 biggest publicly listed firms in the United States by market capitalization.

The S&P 500 is a market-cap-weighted index, which means that companies having the highest market capitalization are given more weight.

The strategy has been beta-neutral from its start, according to Flagship’s prospectus, which means its systematic risk is the same as its benchmark — in this instance, the S&amp;P 500.

This implies that Titan’s team has successfully reduced the size of its portfolio to the point where it will be influenced by macro variables in the same manner as the S&amp;P 500, while still having the potential to achieve above-market returns via the selection of the most promising individual concerns.

Holdings at the top

Titan Invest does not reveal its assets to the general public, while not being as secretive about their portfolio’s composition as hedge funds are. They consistently claim they are not a hedge fund.

Instead, investors who have registered an account with the business may follow the composition of their portfolio in real time, which is the only way to find out what the Flagship fund is investing in right now.

Only by registering with Titan will a user be able to view what they are investing in at any given moment in time.

Companies with good foundations and compelling growth potential are the focus of the Flagship approach. Because the majority of those enterprises are now located in up-and-coming areas like as technology, biotechnology, and renewable energy, corporations like:

In February 2018, the Flagship plan was unveiled. This indicates that it is still relatively new, and its performance data does not go as far as it needs to determine if its method is capable of providing alpha-rich returns over time.

This yields a 3% alpha and a beta of 0.99, implying that Flagship’s systemic risk was almost identical to that of the S&amp;P 500.

However, since Titan charges a 1% yearly management fee to clients with more over $10,000, the alpha has been essentially swallowed up by the company’s management expenses.

Titan’s Flagship has only been operating for a little over three years, thus it’s still too early to say if the strategy is alpha-rich or not. 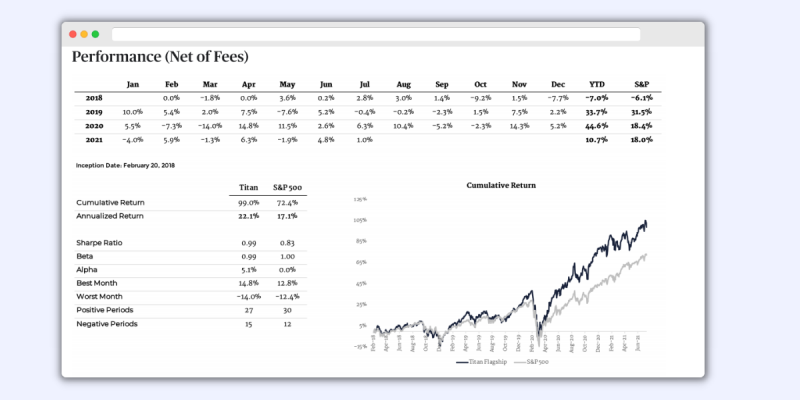 Titan requires a $100 minimum commitment to start an account and invest.

In the meantime, the firm’s pricing is clear. A 1% yearly management fee is payable to investors with more over $10,000 in assets, while those with less than $10,000 pay a fixed $5 monthly cost.

Titan Invest recognizes that each investor’s risk tolerance is unique. As a result, although the portfolio composition of Flagship stays same for each client regardless of this aspect, the degree to which the portfolio is hedged varies from one investor to the next.

Titan hedges an investor’s stake with an inverse S&amp;P 500 ETF for Flagship. Here’s how hedged the portfolio is based on each account holder’s risk tolerance.

Titan Invest Flagship is ideal for who?

Titan’s Flagship is appropriate for investors who have a moderate to high risk tolerance and do not need a constant stream of income from their assets to support their living expenditures.

It might also be an excellent option for people beginning to create a retirement fund or any other comparable fund, such as a college fund for their children or a down payment on a first house.

The following are some of the most common questions we get concerning the Titan Invest Flagship strategy.

When it comes to rebalancing portfolios, how does Titan Invest do it?

Titan rebalances the weights allocated to each individual stock in the Flagship portfolio on a regular basis. The portfolio is often rebalanced when a certain holding joins or quits the portfolio, according to Titan’s staff, to decrease the amount of taxable events for investors.

Is it possible to open an IRA account with Titan Invest Flagship?

Yes. Titan believes that individual retirement accounts (IRAs) are the ideal vehicle for investing in any of their strategies owing to the favorable tax-related circumstances these accounts provide.

How Does Titan Invest Flagship Work With Fractional Shares?

Titan isn’t a mutual fund. Instead, utilizing fractional shares to completely invest the whole amount that the user has placed into the account, its unique software creates a portfolio that replicates the master portfolio of the Flagship method.

Titan is one of a rising number of firms that have transformed the asset management industry’s operations. The business has positioned itself advantageously to become a powerful alternative to the passively-managed vehicles most investors are accustomed to investing in by launching actively-managed strategies that strive to generate alpha-rich and beta-neutral returns.

Despite the fact that Flagship is still new and has much to show, the results thus far have been rather impressive.

Titan Invest, a company that is based in Malta and the United Kingdom, has been around for over 10 years. The company claims to have outperformed the S&P 500 every year since its inception. Reference: titan invest vs wealthfront.

Is Titan crypto a good investment?

A: Titan does not offer any guarantees of success or a guarantee that it will be successful. It is 3rd party software, so there are no customer support resources available should something go wrong.

What is Titan flagship?

A: The Titan is a high-speed multirole assault ship used by the Imperium of Man. It is armed with turrets, cannons and a large siege drill capable of opening up breaches in even heavily armored walls.

What investment yields the highest return?

A: If youre looking for the highest possible return, investing in a 5% interest savings account should be your best option.

20 insider secrets for selling your home